To help people get a conceptual understanding of how Trinitarian relations work, I thought it might be helpful to borrow a concept from mathematics. In the Trinity, one can think of the Trinitarian relations or the relations of origin as three interrelated modes of existence working together to specify how the Trinity exists. There's an analogy to how three coordinates can work together to specify a location, and the most direct analogy is to how spherical coordinates work.

In the spherical coordinate system, there are three variables that define the location of a point P in space relative to an origin. Those variables are as follows:

This is an illustration of the spherical coordinate system for a point P. 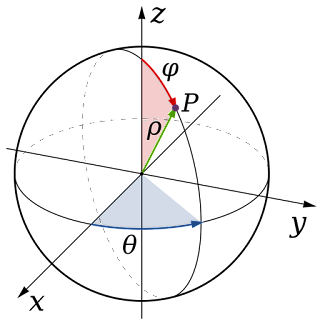 The radius is "special" in this system because it defines the absolute magnitude of the distance from the origin all on its own. It doesn't need the other two coordinates to specify that quantity in any way. We can think of that as the Father being unbegotten; the Father doesn't depend on either the Son or the Spirit to further define His mode of possession of the divine essence.

We can then think of the polar rotation as defining its own plane. It depends on the radius to define a circle, but given that circle, it further specifies the location on that circle. This is similar to the way that the Son further defines the Trinitarian existence, but that mode depends on the Father to do so.

In summary, spherical coordinates are like the Trinitarian relations as follows. First, the radius has a property of defining the absolute magnitude of the distance without reference to either of the other two coordinates, in the same way that the Father is the one source of the Trinity without respect to either of the other Persons. Second, the azimuth in some sense depends on the polar rotation, in that its range is limited based on the polar rotation. But the azimuth still depends directly on the radius to define the absolute magnitude of the distance in exactly the same way that the polar rotation does. This is similar to the way that the relation that defines the Holy Spirit in some way depends on the Son but not in a way that modifies the Holy Spirit's relation to the Father.

Posted by CrimsonCatholic at 11:46 AM